Provincial leaders focus on the north 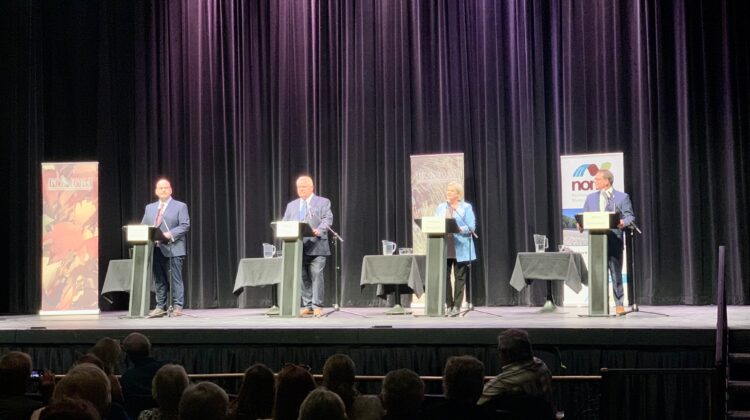 There were a few sparks during the provincial leaders’ debate in North Bay with the four major party leaders highlighting their northern platforms.

The Federation of Northern Ontario Municipalities (FONOM) hosted the event at the Capitol Centre.  A couple of times there were calls of ‘shame’ from the crowd about the Liberals cancelling the Northlander passenger train in 2012.

PC Leader Doug Ford asked the Liberals’ Steven Del Duca why they cancelled it — and said the NDP propped them up. When Del Duca said their plan is to bring it back, both NDP Leader Andrea Horwath and Green Party leader Mike Schreiner chimed in pointing out the Liberals cancelled it in the first place. The Green Party leader then asked Ford if the PCs will actually bring the train back. All four parties have pledged to restore passenger rail service to the northeast.

Federation of Northern Ontario Municipalities President Danny Whalen says the debate went very well with each of the leaders focusing on their party platforms.

“They were passionate about it, but the reality is for northern Ontario not all of those platforms fit into our vision,” he says. “I did make it clear to the leaders that I see enormous potential in the north and I plan on working with them in partnership, not in opposition.”

Whalen also says the north is on the map at Queen’s Park. “Regardless of the party there they are always willing to sit down with us when we’re in Toronto and listen to us.  We offer them suggestions and they take it to heart.  We can work with whatever party is there and I think they pay attention to us,” he says.  Whalen says he’s already told the leaders he’ll be knocking on the door of the winner.

Schreiner asked Ford if he was going to stand up for nurses, PSWs and other healthcare workers and remove the wage restraint. That’s where things devolved into the leaders talking over each other. Ford says PSWs were ignored by the Liberals, who were propped up by the NDP.  Horwath says nurses are leaving because of Ford’s disrespect while Del Duca says Ford is acting like he wasn’t premier for four years.  Schreiner says the workers just want a raise.

Numerous times Horwath referenced Ford helping his ‘buddies’ in Southern Ontario while Ford says the Liberals will take Ontario back and the NDP will hold Ontario back.  Del Duca suggested the PC leader is simply rehashing pledges from the previous campaign.  Schreiner says the north can lead the new climate economy.

***with files from Richard Coffin and Bradley Aubin