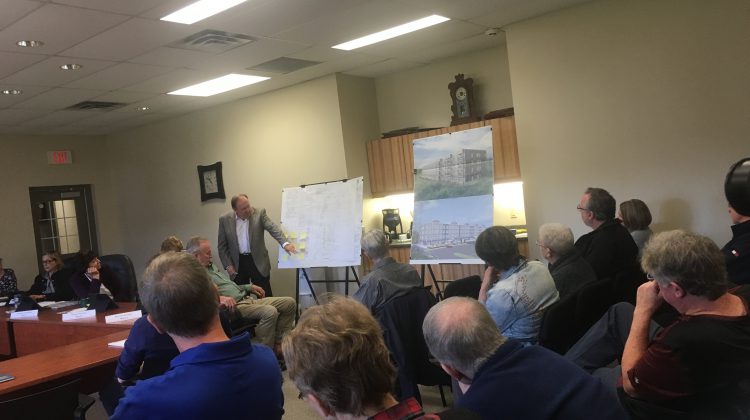 Gardens Retirement Inc. Giving a presentation on the plan for the future Haliburton location (Phil McCabe)

Plans for a retirement building in Dysart et al are moving along.

Bill Mardimae of Garden Retirement Development Incorporated met with Dysart council last week to go over the status of a facility being built at 1 Sunnyside Street in Haliburton.

Although still ways off from construction, Mardimae says the architectural drawings are done, He did note though that the conceptual design of the building is still very preliminary and adds that there is time to change the look of the building.

According to Maridmae, who originally met with Dysart back in September, there is still work to be done to get shovel ready, but he suggested that if all goes well they will be ready for foundation permits as early as next month.

Mardimae noted that because Highway 118 passes by the site, his team needs the approval of the MTO on a number of things, including getting a permit before drilling the well, which Mardimae says has already been applied for.

Another item the MTO has to be involved in is the placement of where a crosswalk goes as you leave the property.

Maridmae pointed out that if the construction of the building is going to stay on schedule, they will need to have the wooden substructure built by October, and then from October on they can work through the winter on the inside.

It was suggested that the draft site plan being revised to incorporate the suggestions of the MTO.