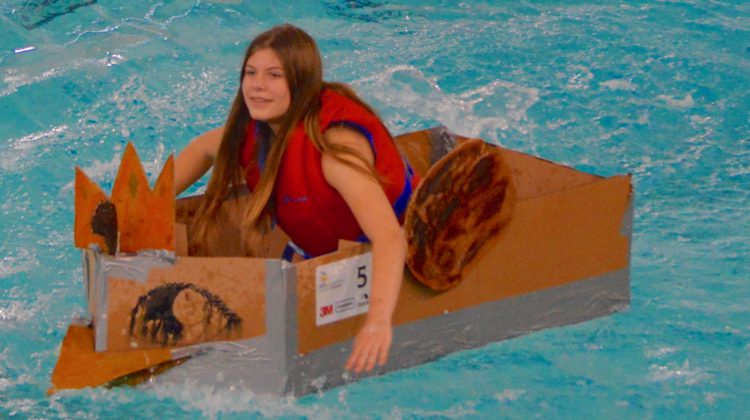 BRACEBRIDGE, ON-Students in Muskoka went head to head in their own cardboard boat races.

On November 27th, students from schools across Muskoka who belong to the Trillium Lakelands District School Board (TLDSB) gathered at the Bracebridge sportsplex to compete in crafting their own cardboard boats and race them at the pool.

In an interview with the MyHaliburtonNow.com newsroom, Kelly Neuman, the Pathways Consultant with the TLDSB said that the annual event saw 25 teams from across Muskoka including elementary schools from Minden, Lindsay and Gravenhurst. “We also had some high school students come by and act as mentors to the grade eight students and help them create their boats,” said Neuman.

Kelly went on to say that this annual event changes from year to year, but it is a way for the students to develop problem solving skills and teamwork. “it was great to see the students working together and trying to figure out how to win,” said Kelly.

Each team was judged on how fast their boat was, how much weight it could hold and the teams creativity when designing the boat.

The teams that received the gold and silver medals, which both happen to come from Riverside Public School,  will move on to the elementary provincial championships in Belleville in March of 2020.